Once a child reaches the age of 18, they are considered to be adults as per the Juvenile Justice Act and have to leave the care homes.  At 18, these young adults are not fully equipped to handle life by themselves and need a helping hand in the form of continued education, training, counselling, mentoring and support. The Aftercare Programme bridges the gap for young adults of the ages 18 to 21 who are leaving their Udayan Ghars, by providing continued rehabilitative services and accommodation options in community, group or scattered housing.

A stepping-stone towards self-reliance

Children from NGOs have usually had a late start; many children who come to Udayan Ghars have never had formal schooling before. The Aftercare programme has been established to ease youngsters at Udayan Ghars into their adult responsibilities, before their rehabilitation into society. Within a few years and with continued support in the form of education, training, livelihood assistance and mental health inputs, our youth attain both the skills and the confidence to move out into the world.

Through the Aftercare Programme, the youngsters have access to a secure place to stay for free. We ease the stress of finances through monetary support, which gives our youth the freedom to pursue their professional or vocational education according to their interests and aptitude. During the course of vocational training, a stipend may be provided till the youngster gains employment. The programme necessitates that these youngsters make appropriate career choices that enable them to earn a decent living for themselves after they leave Aftercare.

To shield our youth from the common pitfalls faced by many in their peer group—such as alcohol or drug related problems, psychological problems, credit trouble, unemployment or even homelessness—we provide them with continuous mentoring, counselling and trainings. Our Aftercare youth turn out to be socially responsible adults, with sound ethics and values. They value diversity; respect people irrespective of any social construct such as class, gender or ethnicity and posses the ability to form healthy adult relationships.

Impact of After Care 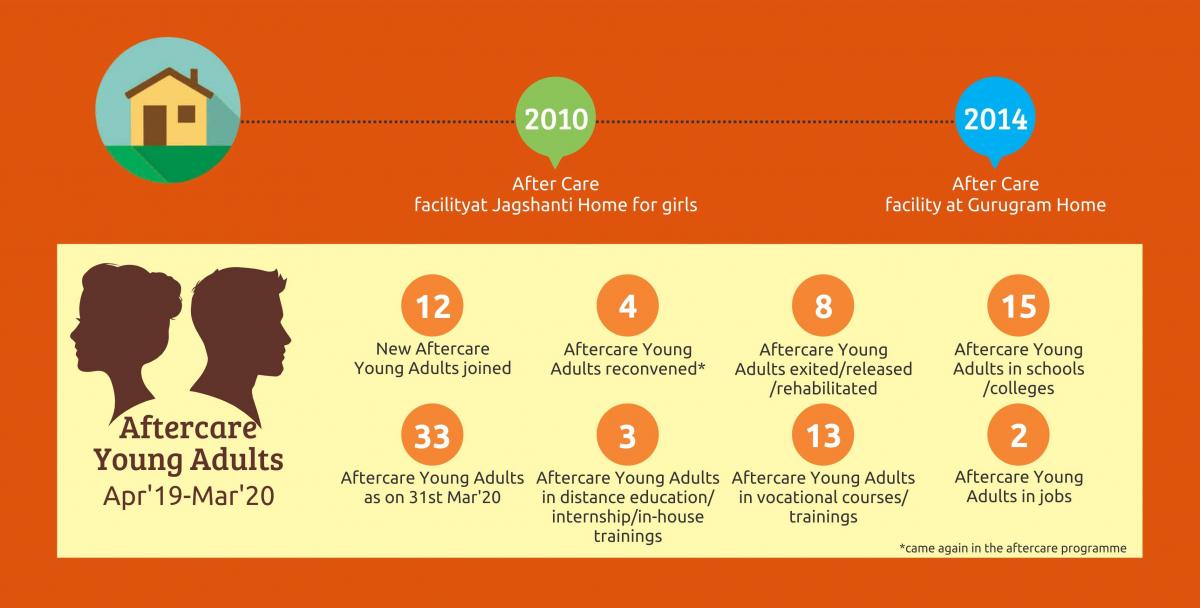 Young adults need constant guidance and mentoring before they can spread their wings and fly independently. Mentors and counselors are readily available, staying in regular contact with Aftercare youngsters, discussing their rehabilitation plans, thinking of creative outlets for their energy and sorting out any of their predicaments.

The programme focuses on capacity building geared towards independent living and career opportunities. The care giving team remains in touch with colleges, institutes or centers. We also organize professional career guidance sessions for our youngsters, besides workshops on different life skills.

Internal monthly and quarterly reports are prepared to review the functioning of the facility on a regular basis. This is supplemented by regular social audits that are conducted for gauging the qualitative progress and achievements of the programme.
An Aftercare committee consisting of programme staff, mentors and at least alumni meet every month.

Youth residing in our Aftercare facilities live together like a family. They treat each other, the staff and Mentors with respect and gratitude. Each of them has been nurtured with love; each is a confident youngster with a high self worth. Having experienced the warmth of their Udayan home and family, they are also eager to give back to their Udayan siblings.

Our bonds with Udayan youngsters remain strong long after they become fully independent — many come back seeking advise on life’s big decisions like changing jobs and getting married!

Our Aftercare homes are built in safe, receptive and congenial neighbourhoods that are prudently selected by the care giving team, or in a wing of an existing Udayan Ghar.

Udayan Care is running two Aftercare facilities presently. At Gurgaon, we have a small independent unit, constructed near a Ghar. Our second facility is located on the 3rd floor of the Greater Noida Udayan Ghar. If need be, we also consider scattered site housing solutions, college hostels and paying guest accommodations.

Ensuring physical and mental well being

Medical care is available to all as per their need. Mentors and social workers maintain links with local doctors and hospitals. Regular health checkups are conducted and any treatment recommendations are ensured.
We promote positive mental health for the youngsters. Regular counselling on an individual and group level is mandatory to ensure that channels of communication remain open constantly.

We have well-established links with corporates and NGOs for placements. Youngsters that are not undergoing formal education are encouraged to learn a vocation or receive professional training so as to lead to their gainful employment.
Young adults are prepared for job interviews through training sessions on resume writing, personality grooming and topics such as crisis management.
Aftercare arranges loans for those who wish to become entrepreneurs, along with professional advice and training for the same.

Youth remain a part of the Udayan family even after leaving care, by becoming alumni. Alumni help the younger ones out in many ways ranging from tutoring and counselling to donating. In this way, the Udayan family keeps growing and ties remain strong for life.

Sheetal was all of 5 when she can to Udayan Care.

Sheetal’s mother passed away soon after giving birth to her. Her father was weakened by depression and trauma; Sheetal and her four sisters were left to fend for themselves. The dark clouds of trouble shadowing the young girls grew when their father was diagnosed with tuberculosis. The sisters had to shift from one relative’s home to another, looking for shelter and support.

When the sisters came to Udayan Care, they lived in Delhi with their ailing father who was finding it hard to support them. Their delicate minds had been traumatized, affecting their mental, emotional and, social well being significantly.

When Sheetal came to us, she was as an under confident and scared little girl. She hadn’t been learning very efficiently at school and often burst into tears. One day at a time, year after year, the Ghar team dedicated their sincere efforts to make Sheetal feel safe and loved. Unyielding care, support and services for her holistic development transformed Sheetal into a bright young woman.

Today, she is a confident, talent and determined spirit. Sheetal was a student in one of the top schools in her city and had good exposure to various careers. In her final year at school, she decided to pursue a career in fashion design. With the unwavering resolution to become a fashion designer, she worked hard for her class 12th board examinations, whilst simultaneously preparing for the NIFT entrance examination.

Sheetal’s mentors, Mr Deepak Sharma and Dr Kiran Modi were constant pillars of support. Encouraging her to dream big, her Mentors were a constant source of motivation.

Recently she cleared the final board examinations with the grand score of 88% in the science stream. Sheetal’s grit along with the Udayan Ghar Team’s backing, has changed her life forever.

Sheetal carved her way to India’s most renowned fashion institute—National Institute of Fashion & Technology (NIFT), without any training or coaching. Currently a happy student at NIFT Mumbai, she is all set to become a fashion designer.